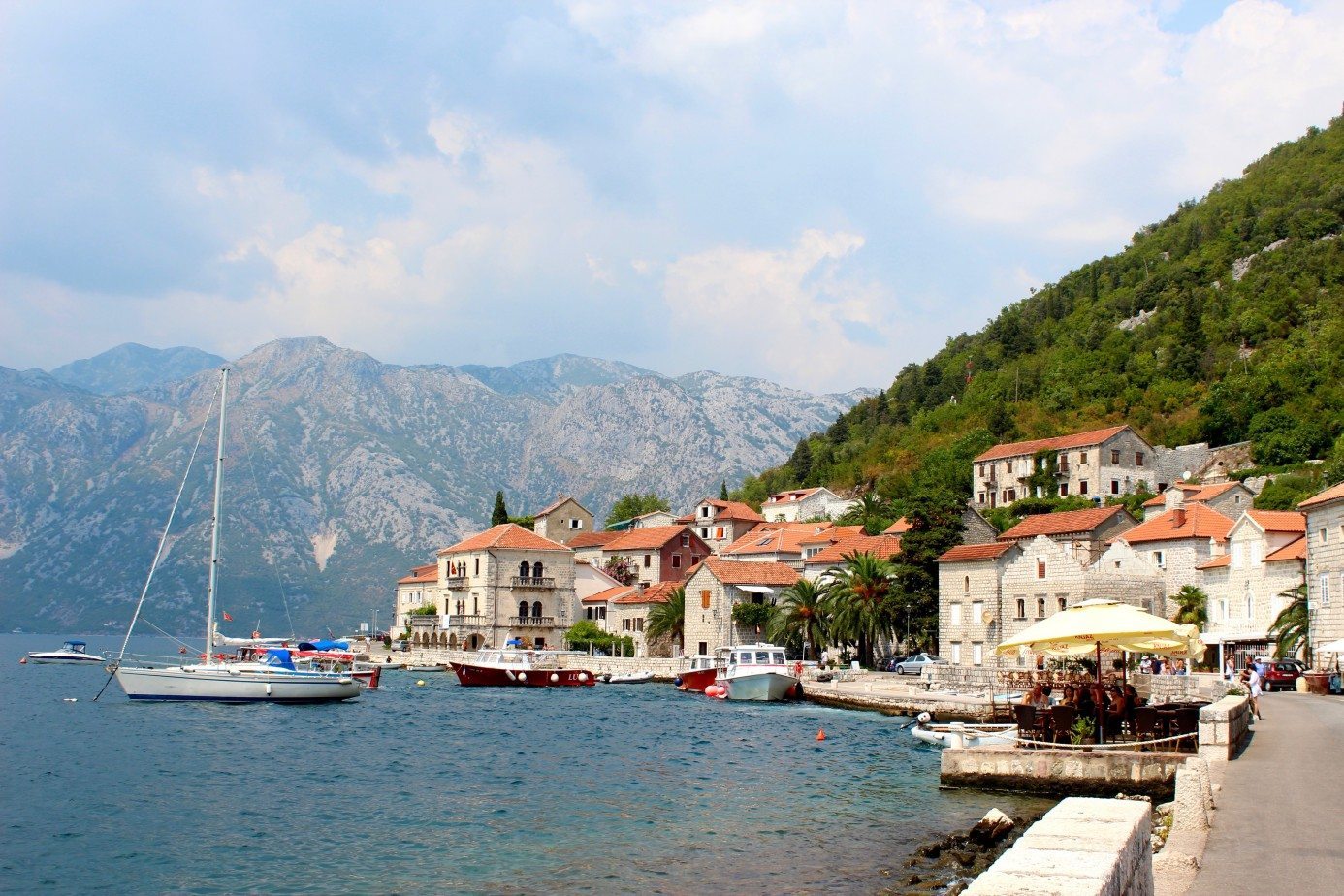 After a beautiful 40 minute drive we arrived to Kotor, Montenegro and were greeted at the front gate entrance by Michelle, the lady we were renting our adorable apartment from. Kotor is a coastal town located on a secluded part of the Gulf of Kotor. Kotor was first settled in ancient Roman time and is surrounded by beautiful fortifications that were built during the Venetian time and it is now a UNESCO World Heritage Site. Over the entrance of the wall there is the quote engraved into the stone “What belongs to others we don’t want, what is ours we will never surrender.” It is an absolutely gorgeous town, so clean and preserved. Not too many people know about Montenegro so the tourism level is still low enough where you can really experience the Montenegrin lifestyle. All throughout the windy marble streets of Kotor you’ll see plenty of Montenegrins just sitting outside, enjoying an espresso, smoking a cigarette. You can’t help but to fall in love with the city and the charm of the stone houses with all the gorgeous different colored shutters.

After a quick dinner the first night we decided the next day we were going to get our adventure on so we signed up to go whitewater rafting. We woke up at 6 am (ouch) and and headed to the main gate where we were picked up by the owner. He took us in his car on a 3 hour car ride through gorgeous scenery up into Bosnia where the Tara River is located. The further up we went into the mountain the colder it got, and the lusher the trees got. We finally reached our site where there was a little house on the top of a hill overlooking the river. They gave us a quick breakfast of breads with honey and this cheese spread that was unidentifiable but not bad. Because it was so cold they made us hot tea which was out of this world good and I’m not even a big tea drinker. It tasted like a mild mint tea. I asked what kind it was and they replied “We just went down to the riverbank and picked a bunch of grasses and herbs to make the tea”. How awesome is that? I don’t know about you but that’s how I want my tea all the time! As we were suiting up with our wetsuits they asked us if we would like fish or lamb for lunch. I told them lamb and then we were taken in a jeep on a bumpy 15 minute drive to the drop off point. No matter how thick our wetsuits were we were not prepared for the coldness of the water. Freezing. I’m a Florida girl so I like my water warm, and this was not warm at all. Jesse and I get in the front of the raft and we set off. The scenery was breathtaking. Gorgeous mountains on either side of you flocked with the greenest of green trees. The rapids started and we were off! Let me tell you… first frigid splash to the face woke us right up. We went down the river through the class 3 rapids for about 3 hours. So much fun. When we got back we hiked back up to the house and had a beer and waited for lunch. They first served us a veal stew which was out of this world good. Next they served us the tradition lamb sač (lamb cooked under coals) along with potatoes and vegetables. Oh. My. God. Best meal in Montenegro by far. It was out of this world good. Melt in your mouth, full of flavor and fat which always makes for a good meal. They served us shots of šljivovica which is house made plum brandy (tasted like rubbing alcohol), and beer. An absolutely amazing lunch minus the šljivovica. After lunch we hopped back into the van, proceeded to pass out from exhaustion, and woke up back at Kotor. That night we grabbed a quick dinner and bottle of wine and hit the sack because we were so tired. Whitewater rafting takes a lot out of you!

The next morning we woke up and decided to hop in the car and explore the surrounding cities. The drive alone is just spectacular. We drove to the town of Perast and decided to get out and walk around. Perast is so picturesque it’s mind blowing. It sits right on the water with the gorgeous mountains all around, making the perfect backdrop. We walked around the town for a little bit until a lady approached us asking if we would like to hop on their boat and they would take us to the two islands in the bay. They had the cutest little kids that were jumping in the water and collecting mussels so we had to say yes. We got on their boat and they took us around the two small islands. One has a very old church on it, called Sveti Đorđe (St. George) and the other is the only artificial island in the Adriatic Sea called Gospa od Škrpjela (Our Lady of the Rock). Gospa od Škrpjela was built by two Venetian sailors after they discovered a picture of the Virgin Mary in 1452. It is now a small museum which holds gorgeous paintings and tapestry. After that we got back on the boat, waved goodbye to our new friends and got back in the car. We stopped at this little bar in Risan for some food, a quick swim, and a good drink. All this exploring really makes a girl thirsty after all! We decided to go on one last adventure before heading back home. We heard about a city up in the mountains that all the delicious cheese and meat comes from. So, up the mountain we go, on a very narrow one car, barely paved, no railing road to the city of Šavnik. About 10 minutes before we actually got to the city we were debating turning around because we were in the middle of nowhere with not a person in sight. While we were sitting on the side of the road with a map a man drove by and I flagged him down asking where the city was. He motioned me to follow him. We pulled into the small sleepy town and saw roadside vendors selling meats and cheeses everywhere. Talk about heaven! We bought some meat, said “hvala” (thank you in Montenegrin) and decided to drive back down the mountain. As soon as we get in the car something wonderful happened… the low fuel level light went on. Talk about full blown panic settling in. We were at the top of a mountain in a National forest with basically no one in sight, let alone a gas station. So, we started driving and said a little prayer. Thankfully it was all downhill or else we wouldn’t have made it. That would have been a fun phone call to my parents back home… “Hey mom and dad, Jesse and I are stranded in the middle of nowhere Montenegro without gas and the sun is setting.” As soon as we exited the mountain there was a gas station. We giggled like little pre-teen girls at a Justin Beiber concert while we filled up. That night we went and had a delicious dinner and some wine. We had a few drinks out that night and met some fun people.

The next morning we planned on driving to the famous crno jezero (black lake) in the city of žabljak. We were told that it is a 3 hour drive and it was easy to find. Wrong and wrong. It was a nail biting 4 1/2 hour drive through the most gorgeous mountains. Even though it was gorgeous the drive was very dangerous and we were on the tips of our seats the entire way. We made our way up and down mountains, not really knowing where the hell we were going! We were literally the only people on the mountain so there wasn’t anyone we could stop and ask for directions. We finally drove through a small village and saw a bunch of people sitting outside of a restaurant. We decided to stop because at this point the only thing we’ve had to eat was a croissant before we left and some wild raspberries we saw growing on the side of the road and grabbed. We pull up and walk up to everyone. They looked at us like we had 6 heads. We asked in our best Montenegrin if it was a restaurant and thankfully there was one guy that spoke a little English. He informed us that it wasn’t a restaurant, just a place the people of the village gathered to have a mid-day coffee or beer. They offered us a Turkish coffee which we accepted. If you have never had Turkish coffee before it is a very thick strong coffee with about an inch of sediment at the bottom. When I was in Turkey last Summer I was informed that if you drink your coffee all the way down to the sediment and then flip the cup over onto the saucer, a person can look at the way the sediment drips and can read your fortune. After I was done drinking my coffee I asked if they read the Turkish coffee like they do in Turkey and there was a lady that could. She read our fortunes while the guy translated. Apparently Jesse is going to marry a man with a cat and I’m going to die alone. Something along those lines. Awesome. After that we told our friends that we had to go and they said that we were about 40 minutes away from the Black Lake. We continued on our way until we finally got there. We looked at our watch and realized that if we didn’t leave right away that we would have to drive through the mountains at night… which was not a smart idea. We walked down to the lake, snapped a few pictures (it wasn’t that impressive really) and got back in the car. After about a dozen wrong turns we got home right as the sun was setting and breathed a sigh of relief. We decided right then and there that we needed wine. We went downstairs to the most adorable wine bar and had some food and a few glasses of wine and spent the night meeting new friends. The next morning we had to wake up and make the long drive down the coastline to Split, Croatia where we would spend the next 2 nights.