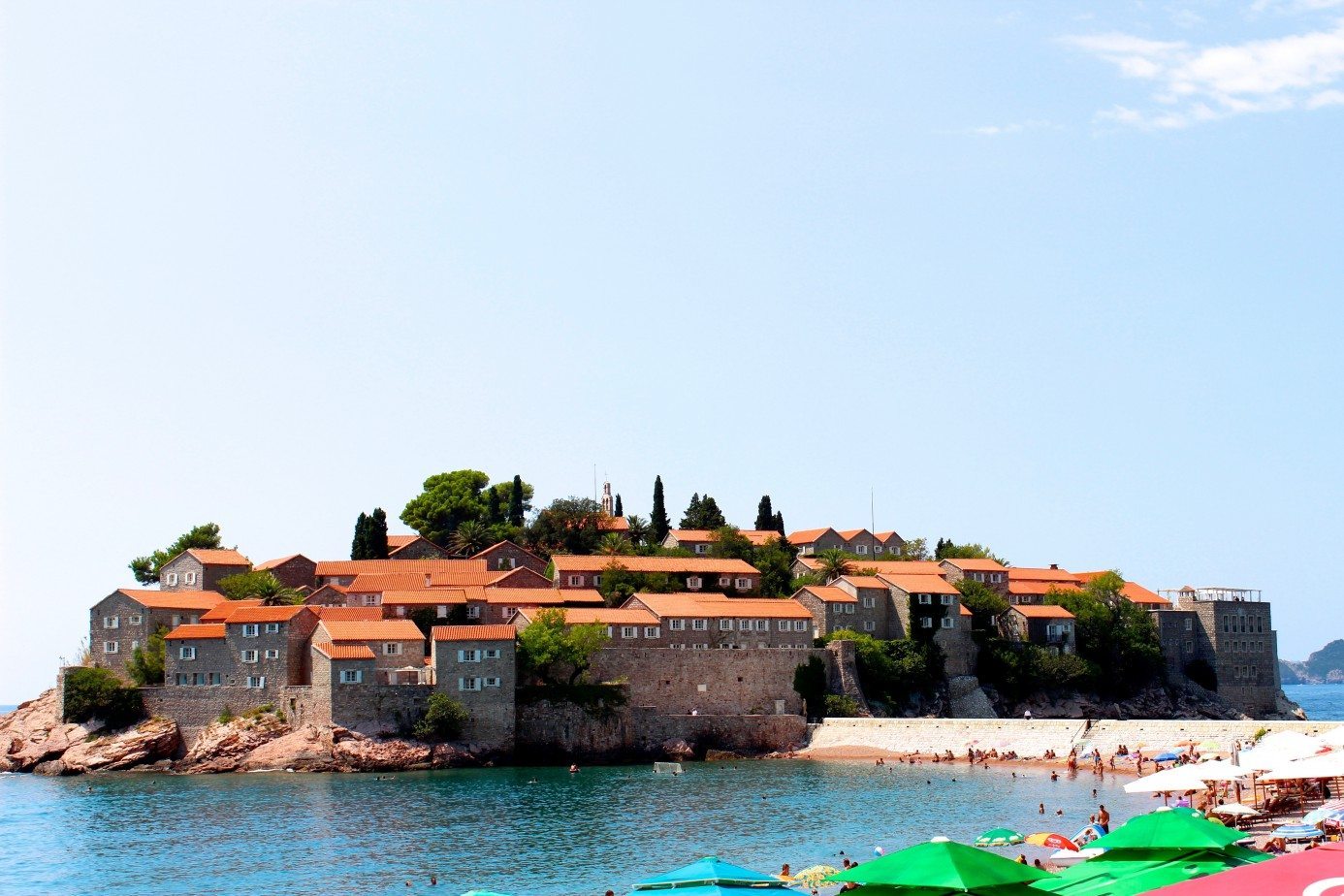 When I told my friends, family, and strangers that I would be traveling to Montenegro for 8 days this is the reaction I got… “Montenegro? Why? Where is that?”. Well, why not?! My cousin and I were planning for our annual trip this Summer and decided on Croatia. We always try and throw another country in there when planning our big vacation and Montenegro is an up-and-coming hot spot. One of our friends has been there and loved it so we were sold on Montenegro. It is breathtakingly gorgeous and untouched in most parts. Montenegro, as well as Croatia, Bosnia, Slovenia, Serbia, and Macedonia are all part of the former Yugoslavia that broke up around 1991. After that Montenegro was a part of the Federal Republic of Yugoslavia which was Montenegro and Serbia. That broke up in June of 2006 making Montenegro it’s own country since. It is very mountainous and has a breathtaking coastline. My cousin and I first flew into Dubrovnik, Croatia then rented a car and drove to Budva. It was about an 2 hour drive but the drive was spectacular. The roads wind along the cliffs, leaving you with a view around every bend. We rented an absolutely adorable apartment in Budva for 4 nights, and it was walking distance into Stari Grad (old town). Our first night there we walked into the old town which is an old fort with gorgeous architecture. The person we rented our house from told us to look for a restaurant called “Konoba Stari Grad”. We were on a mission to find this because they supposedly had the best food in the fort. As we were walking around the windy narrow streets we came across a “Konoba” and sat down. We quickly realized that it wasn’t the right one and asked someone where it was. They looked at us like we had three heads when we asked. We thanked them for nothing and kept looking. We found one that said “Konoba Stari Grad” on it so we decided that must be it. We ordered cevapi, a kind of sausage that has a meatball flavor and consistency which is absolutely delicious, a cheese board with local cheeses and meats, and a salad. First of all, I just have to say that the produce in Montenegro is unlike anything I’ve ever had. Imagine a tomato with the flavor of 100 tomatoes. They’re this gorgeous deep red color with low acidity and it makes me want to cry just thinking about it. Anyways, we had a delicious meal and washed it down with a bottle of local Rose wine. After we left the restaurant we quickly realized looking around that “Konoba” means restaurant. Yea, thanks for explaining that one to us apartment lady! Blonde moment. We decide to have a night cap at a little bar in the old town and call it a night because we were worn out from traveling.

The next morning we got up and walked into town for breakfast. Budva, how do I say this nicely, is pretty trashy. Imagine the dirty part of South Beach Miami. Clubs everywhere, lots of Russian tourist, you get the idea. But, it is a great central point for day trips. We packed up the car and headed out to the beach Sveti Stefan which was about a 20 minute drive from our apartment. Sveti Stefan is a little island off the coast of Budva that is a 15th century fortified village that was built to defend against the Turks. In the 60’s Sveti Stefan was a playground for the very rich and famous. It is now a 5 star hotel so no one is allowed to go on the island unless you are staying there. We decided to stay on the beach right next to it and lounge for awhile looking at the gorgeous island. We got back in the car after a few hours and drove along the coastline, driving down to Bar which is another beach town. We found this amazing beach bar and decided to stop and enjoy a cold beer by the water, then go for a little swim. That night we went made it to the actual “Konoba Stari Bar” our host was telling us about and had the most delicious grilled octopus I’ve ever had. We went out for a few drinks that night at this adorable open air bar that was under this huge old lime tree. The bartenders would reach up and grab a lime when they needed it! How cute it that? We also made friends with some hilarious Italians and Serbians. Oh, the memories.

The next morning we got up bright and early and hopped in the car to go to Lake Skadar. Lake Skadar is on the very East side of the country. Half of the lake is in Montenegro while the other half is in Albania and it is the largest lake in the Balkan Peninsula. We rented a boat with a driver, who just happened to look identical to John C. Reilly which was hilarious, and he took us around the lake. He was too precious. He could not speak a single word in English and all he did was pick us water lilies and give us a thumbs up while steering the motor in tiny shorts. After our little excursion we decided to drive some more and we ended up in the city of Stari Bar. Stari Bar is an ancient city that was destroyed in the 1800’s and is just now being populated again. We went into the main town square and decided to get some food. We stumbled upon this little hole in the wall place that looked like someone’s house and sat down. It was run by a family where everyone worked as the servers and cooks. You know the food is going to be good when the family is back there cooking! The food was delicious and the people were so sweet. They couldn’t speak much English so there were a lot of hand signaling going on but we got through. He brought us out homemade cheeses, cevapi (yum), tomatoes, wine, breads, and this amazing cherry dessert. He even let us try his lunch… cow tongue soup. Actually delicious! After our heavy lunch we walked around the old town for awhile before getting back in the car and heading back. We were so full from dinner that we just sat on our porch and drank wine, snacking on some local cheeses and fruit we picked up the day before instead of going out to dinner.

The next day we drove through the gorgeous mountains into the interior of the country into their “wine country”. We drove around for awhile until we saw a sign that sparked our interest. We made a right onto a dirt road where the sign named “Raičevic Bukovik” pointed to. We go down a windy, steep gravel road until we come to a house. I rolled down the window to ask a lady tending to her garden where the hell the winery was because I didn’t see anything that resembled a winery! She of course didn’t speak any English so after a few hand movements and noises she figured out what I was talking about and she led us to the house next door. My cousin and I sat there not knowing what was going on. Through the gate we see two men sitting on their porch under grape vines reading the paper in just shorts. What is with no one wearing shirts in this country?! They saw us pull up, put on some shirts, and lead us through their gate. They had an adorable house surrounded my rows and rows of grape vines and a long driveway covered with grape vines. I ask him if it was a winery and he said it was. Neither of them spoke very good English but they tried! They mostly responded with saying “good” and giving us a head nod. They led us to a tasting room while the other man went and got some wine out of the barrel for us to try. He poured us a glass and then led us into his garden where he picked us fresh delicious figs and showed us around. They grew the typical grape in Montenegro which is a Vranac. It tastes a lot like a Zinfandel and it is absolutely delicious. Actually, most of the wines in Montenegro were delicious. They are pretty light with lower acidity and tannins unlike heavier reds that you would find in France or Italy. Anyways, they showed us around, gave us some delicious wine, and some fresh figs for the road. We get on the road and head for the city of Tivat for Porto Montenegro. Porto Montenegro is a very upscale harbor with yachts everywhere. We decided to splurge for the day and get two lounge chairs at the swanky “Puro Beach Club” right on the water. We had some delicious food and great Rosé and spent the rest of the day lounging by the pool and swimming. We stayed in Tivat for the sunset at the harbor which was spectacular before heading back home to Budva. We went out in Stari Grad for our last night before packing up the next morning and heading to Kotor for the next 4 nights…