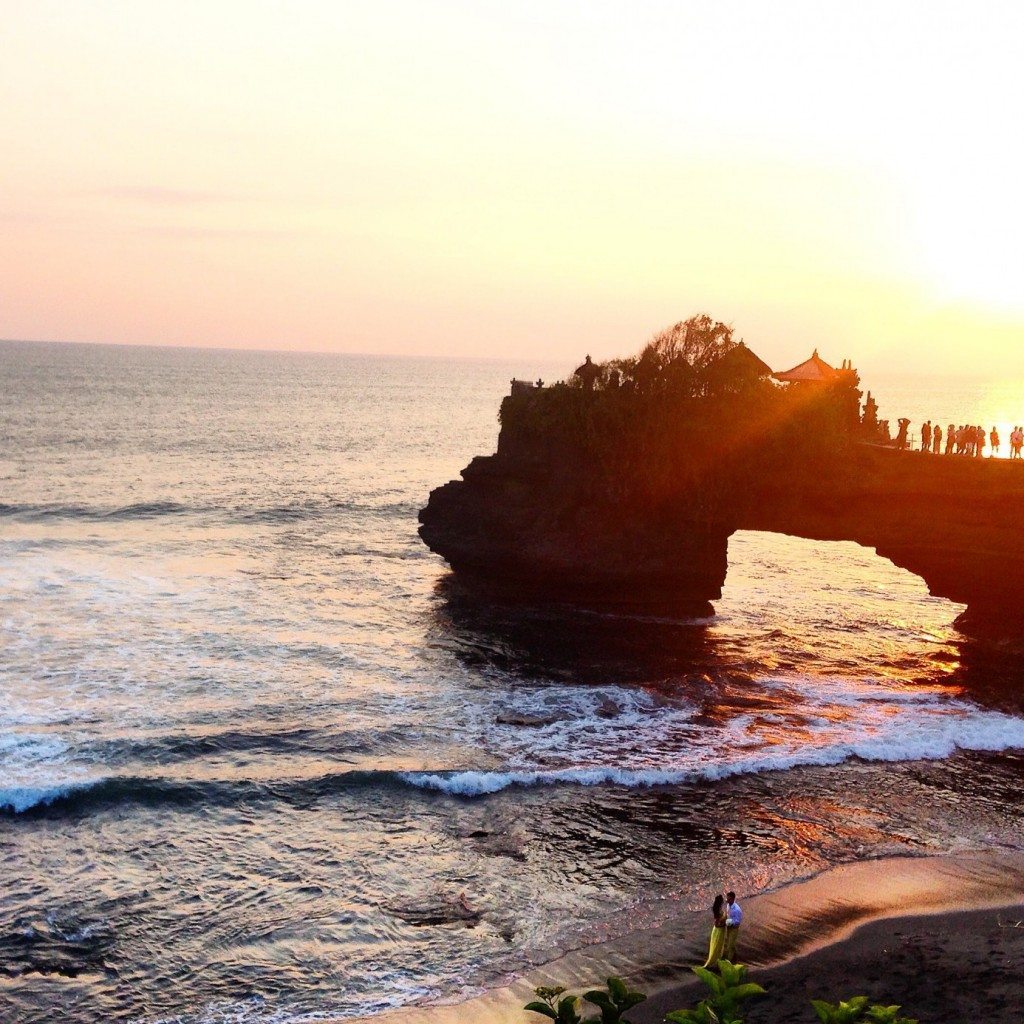 After a salty and bumpy two hour ferry ride from the island of Gili Trawangan we arrived in Bali. I squeeled with excitement  as we pulled into the small boat lined harbor. Bali has always been my dream vacation spot and now the time had finally come, I was here. I was in Bali. We docked and jumped on a bus to take us to our amazing villa that we rented on airbnb.com named “Vila Katu”. The owner let us in and showed us around the magical and private garden, small pool, and villa. We checked in and got settled before leaving to go explore. Right next to our villa was a small cafe called “Waring Kzu” and we ordered a yummy noodle dish and a cashew chicken curry to fuel us for the rest of the day. We gobbled down our quick lunch and headed to the main street to walk around. Seminyak is a very touristy area of Bali- known for it’s hip restaurants and cool bars. Not at all like you expect when you think of Bali. There aren’t any serene green rice terraces with Julia Roberts biking around. No, no. More like droves of drunk Aussies bar hopping from kitchy bar to kitchy bar. When booking our trip we wanted to spend a few nights here  for the nightlife and a few nights up in the rice paddies of Ubud for a more relaxing and authentic stay. While walking down the main street we saw a really cool looking placed called ‘La Favella”. It was very New Orleans styled and very cute. We ordered a round of Moscow Mules with homemade ginger beer which was soooo good. As we sat there enjoying our cocktail  and talking I looked down as an otter ran under my feet. An otter!? In Bali?! I had to do a double take to make sure the Moscow Mule wasn’t hitting me hard and playing tricks on me. It turns out that the restaurant has a resident otter that runs around freely and lives there. It has a cute little pond in the corner it would run into and cool off occasionally. At that moment I decided I wanted a pet otter. We got a little hungry sitting there so we ordered a small pizza and a few appetizers to share which were all very delicious. The ambiance was very relaxing and we sat enjoying our tasty cocktails and light dinner, soaking in the last of the Balinese sun. The only thing calling our name after dinner was our private pool and a delicious cocktail at our villa.

The next morning we walked to a nearby bakery to pick up some breakfast before being picked up by a guide that we pre-arranged the day before. Wie Wira (that was his name) picked us up and we were off. We drove two hours to Besakin Temple in Karangasen which is the largest and most holy temple on Bali. It was so expansive and beautiful. We walked around in our sarongs that we bought from a lady outside the temple and listened to our guide as he told us all about the temple and the impact on the Balinese culture it has. We walked around, taking in the beautiful of the different levels of this majestic and sacred temple and watching Balinese families all around worshiping.

After our tour of the beautiful temples we stopped at a restaurant for a quick lunch up in the rice paddies before continuing through the beautiful villages. It was so beautiful and serene sitting atop a rice paddy enjoying our lunch. Our next stop was at a coffee and tea plantation for a tasting of all of their delicious teas and coffees they make. We walked through the fields, taking in the beautiful sweet smelling trees and plants that surrounded us. We bought a few different types of teas to enjoy while in Bali and then headed home towards Seminyak, stopping at the beautiful Tegenungan waterfall. For dinner later that night we headed to the Motel Mexicola. It’s a very quirky Day of the Dead Mexican themed restaurant with surprisingly good Mexican food. Who knew I could travel to the other side of the world for good Mexican food?! We ordered a few rounds of margaritas and watched the drunken fools Salsa dance the night away.

Wie Wira picked us up the next morning bright and early to take us to the famous Uluwatu Temple. It’s a monkey-filled temple on the top of a cliff overlooking the beautiful water. I looked around to make sure no monkeys were coming to attack us before going in. You have to watch the monkeys…they’re evil and have no fear! As we were walking by I saw this adorable little monkey sitting on a ledge staring at us while eating something. I looked closely and quickly realized it was poop. The monkey was eating poop.  And not only was he eating poop but the second he saw us looking at him he tried to jump on us, poop in hand. We ran away as fast as we could to the van because we had seen enough! As gorgeous as that temple was I was not in the mood to have poop thrown at me. On to the next stop!

We drove down the rocky coast until we reached the small but famous Padang Padang beach. Climbing down a small steep staircase that was carved through a boulder we made it to the beach. Our feet finally felt the warm sand and we were greeted with the salty breeze. It was still early enough where it wasn’t overrun with people so we walked around, exploring the beautiful sandy beach. Huge boulders were everywhere which made every inlet feel private. Unfortunately we didn’t wear or bring our bathing suits so we sat on the beach in our clothes enjoying the beautiful day. Close to the entrance of the beach by the water was this little Indonesia lady with a small pop up restaurant. She had a small table, one burner to cook on, and a cooler full of ingredients.  We ordered the mie goren (an Indonesian noodle dish) which was ironically one of the best ones we had on the entire trip. It was SO good. We sat there eating our delicious mie goren while enjoying a cold beer and watching people swim in the blue waters.

We found our driver and headed back towards the villa because we had a few hours to spare before it was sunset and that night we were headed to the beautiful Tanah Lot Temple for sunset so our guide dropped us off at the famous Potato Head. It doubles as a restaurant and a swanky beach club. Anyone who is anyone and wants to be seen goes to Potato Head! We had a few mojitos there while people watching and meeting new friends. The mojitos were delicious and went down wayyyyy too easily. We made our way back to the villa where we decided a late afternoon swim was necessary before getting ready. The cool water was exactly what we needed to sober us up. Oops.

Wie Wira picked us up and we headed to Tanah Lot Temple for sunset. Tanah Lot is a beautiful temple right on the sea. Tons of tourist flock to it every night because it is very picturesque as the sun is setting. It was a clear night and the sunset was so beautiful as it set behind the temple as the waves were crashing around it. Just amazing. After the sun had set we headed to a restaurant close to the temple that was right on the water to have a beer while we waited for our show to start. It was a beautiful night with the salty breeze and this group of Indonesian men singing Jimmy Buffet songs were cracking us all up. They were all so excited that we were from America. We sat there singing along to “Margaritaville” enjoying our beers until it was time for the show. We walked into an area set up outside with chairs around a huge fire. We were seeing a traditional Kecak firedance. The dance was so much fun to watch. Twenty men of all ages sat around the fire, making noises with their mouths in sync and swaying back and forth. There was a story being told and we watched as traditionally dressed women came out around the men and were dancing. It was mesmerizing to watch and hear. We absolutely loved it. A must see in Indonesia. After the dance was over we were dropped off at a wonderful restaurant called Mama San for dinner and we said goodbye to our guide because we were heading to Ubud the next day. We walked into the beautiful restaurant  and sat down. We ordered the homemade ginger beer and rum to start and for dinner we had the chicken randang and beef and lemongrass dumplings. Both were out of this world good. We toasted to our last night in Seminyak and to our next adventure that started tomorrow in Ubud.