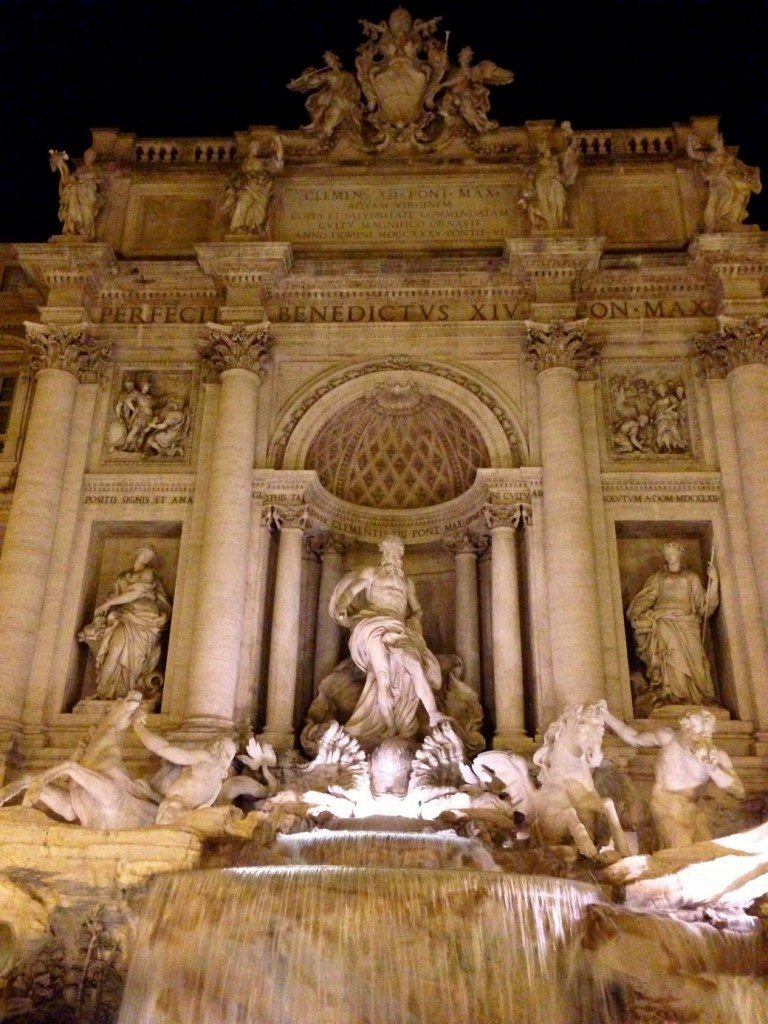 We landed in Rome around 3 and hopped in a cab and went straight to our amazing apartment that is located right next to the Coliseum. We decided as we were waiting for the guy to let us in that we would have a bottle of wine and cheers to a new city to conquer. The guy came (as we were finishing the bottle) and let us into our apartment which was beyond amazing. We probably went a little overboard for just the two of us but hey… when in Rome! We quickly showered and changed and went out to explore. When we were in Kotor, Montenegro we met a very vivacious Roman man one night when we were at a wine bar that gave us all the good spots to check out while we were in Rome. One of his suggestions was to go to the Piazza Navona area and have dinner at a restaurant called Del Francesco’s that is one of his favorites. After getting lost for a good 30 minutes we finally found the cute little Piazza and put our name in for dinner. We knew it was going to be good because there were only Italians there and we stuck out like a sore American thumb. We sat down at a table outside and ordered a bottle of red wine to start. Our waiter had lived in America for a short time and all he wanted to do was talk about America which was hilarious. I don’t know if the tables around us found it so funny because he neglected them a little bit but oh well. I ordered the fresh ravioli with cherry tomatoes and mozzarella and Jesse ordered a pasta dish with meat sauce. Both were out of this freaking world. I mean, come on… it doesn’t get better than eating pasta IN Italy. When we were done with dinner our waiter surprised us and brought us a pistachio tiramisu. I took one bite and I think a tear rolled down my cheek. It was like eating a little pistachio cloud from heaven. If I wasn’t so incredibly full from dinner I would have licked the bowl and I wouldn’t have cared if anyone was watching. After our incredible meal we went back into the little Piazza and noticed that the next door bar called Bar del Fico was obviously the place to be because it was so crowded. We decided to have a drink there before heading home. We were so exhausted from the entire trip we just wanted two nights to relax and spend the next day sightseeing Rome. Wrong…

Jesse and I went inside and grabbed a drink and went back outside to a less crowded area. As we were standing there we noticed a group of very Italian young men standing next to us obviously talking about us in Italian. One of the guys was on the phone and then looks at us and says “My friend is on the phone and wants to talk to you”. I looked at Jesse, then at the phone, then at him, then back at Jesse. I shrugged my shoulders and took the phone. On the other end was another Italian guy that once lived in America and wanted to say hi. We talked for a minute or so and then I handed the phone back to him. They all but 1 (the guy with the phone) barely spoke English and they started trying to talk to us. They asked us if we wanted a drink and we asked then what they were drinking. “Mojitos, of course. This bar makes the best mojitos!” Jesse and I looked at each other and smirked a little and told them we would have a mojito. I’ll be damned it was a good mojito!… and trust me, I know a good mojito. We stayed there for awhile talking with the guys and drinking mojitos. Then they decided it was time to go to another bar for some more drinks. They took us to this little underground looking bar/small nightclub and we stayed there until about 2 am when it closed down. The boys decided that after that they wanted to give us a tour of the beautiful city that they live in. We walked around the streets as they showed us all the beautiful Piazzas and architecture that are so easily overlooked during the hustle and bustle of the day. Their faces would light up with every great statue that they showed us and they would tell us a little about everything we saw. It was beautiful to see people who live in such a wonderful place actually appreciate it. It’s so easy to take advantage of something you see day in and day out. After walking around for awhile they took us to the famed Fontana di Trevi (Trevi Fountain) in the Trevi district. Let me tell you… there was something very magical about being at this extremely old and gorgeous fountain at 4 am. First off, we were alone there, which is very rare. It is one of the most seen landmarks in Rome so that means tons of tourists and even though I may be a tourist I hate being surrounded by tourists. I want to go places no one knows about. I want to taste the local food, hang out with people that live there, and see things no one has ever heard of. The boys informed us that it is good luck to throw a coin over your shoulder in the fountain so all of us (obviously) threw in a coin. After being there for awhile and soaking it all in we decided it was time to head home. It was almost 5 am and we had a long day ahead of us tomorrow.

The next morning we got up as early as we could and walked around the corner to a little cafe and got a cappuccino and pastry to go. We decided that since the Coliseum was so close to us we would go there first. We hired a guide (there are plenty of them standing around the Coliseum) to take us so she could explain more to us about the history. It’s unbelievable how old it is and what took place there so many years ago. I know it is a tourist trap but it is definitely something I would recommend seeing if you are there. After that we walked all around the city. We stopped at this little roadside restaurant for a quick lunch to fuel us up for the rest of the day. I ordered a delicious pasta (obvi) with a spicy tomato sauce and Jesse ordered a pizza. Ugh, so good! I don’t understand why it is so good. We washed it down with a huge Coke and we were off. One thing that Jesse and I love doing when we travel is to find old record stores so we can buy old vinyls to take home. Totally hipster, right? We heard about this one great record store on a few sites so we walked down to where it was. By the time we got there they were closing up for siesta (what are we in, Spain?!) and told us that we would have to come back in an hour. We were so upset because all we wanted to do was buy some old Italian records damnit! Fail. Oh well, off to the next stop. We read somewhere about the oldest gelato place in Rome called Giolitti so we decided to check it out. I ordered a cone with hazelnut gelato and what I thought was nutella flavored gelato. Nope, it was just straight up Nutella and let me tell you… he didn’t skimp. As much as I love Nutella, it was a little much. I’m not going to lie, I was not impressed with the gelato! Some people might get very offended by this but neither of our flavors were spectacular. We we actually a little disappointed. We didn’t even finish the whole cone! Now, if you know me you know that I never let any ice cream go to waste. Oh well, you win some and you lose some. We walked around with no plan, taking in the city and the gorgeous day. We walked by the Tiber River, and went to the Trastevere area for a mid-day wine break. We were pooped from the night before and walking around all day. We walked a little further before we decided to cab it back to the apartment. We couldn’t take anymore walking. We showered and lounged on the couch, watching old movies and drinking wine. Just absolutely loving every second of it. Our new friends texted us telling us they wanted to meet up tonight in the Trastevere area to go out.

Jesse and I changed and headed over later to the Trastevere area to go to a restaurant that was highly recommended to us called “Il Ciak”. It’s this adorable little hole in the wall serving up really delicious food. The owner and his son were absolute dolls, giving us tons of attention. They recommended what wine, appetizer, and dinners to order. We obviously listened and ordered everything they suggested. We got our wine and did a quick “Salute!” to our last night in Europe. We sat there talking with the owners, sipping on our delicious wine, and snacking on our appetizer. For dinner I got the pasta carbonara which is a Roman classic and if I heard one more person say I needed to try it in Rome I was going to roundhouse kick them in the face. It’s a very rich pasta with egg, Parmigiano, bacon, and pepper. Ugh, so delicious but so filling. The owner came up and saw that I was slowing down and said that it was unacceptable and I needed to finish my plate! I told him there was absolutely no way I could eat anymore and he didn’t take that for an answer. He picked up my fork, twirled the rich pasta, and started to feed me like a child. Yes, he fed me. Not just one time but a few times. They weren’t small bites either people! His son sat there laughing at me with my cheeks bulging with pasta. Jesse obviously sat there laughing at me and taking videos. After they cleared our plates we sat there sipping our wine until the son brought out limoncello from his family’s farm, then another wine, then some other kind of aperitif, then cappuccinos. Then they brought out an absolutely delicious dessert. Even though I was full I could still eat it. I’m almost positive I have a separate stomach for desserts because no matter how full I am I can always eat dessert. After dinner we got a call from our friends to meet them at a bar close by. We went over to the bar to meet them and to have some mojitos. Apparently mojitos are all the rage right now in Rome. We bar hopped around to all their favorite spots the rest of the night with the boys. Too much fun, yet again. By the time the fun was over it was 4:30 and we had to get up the next morning to catch our flight home at 6:30. Let me tell you, that was NOT fun. I mean, I was one notch above death… but it was well worth it. We had such an amazing time and I definitely will go back very soon. Arrivederci Roma!