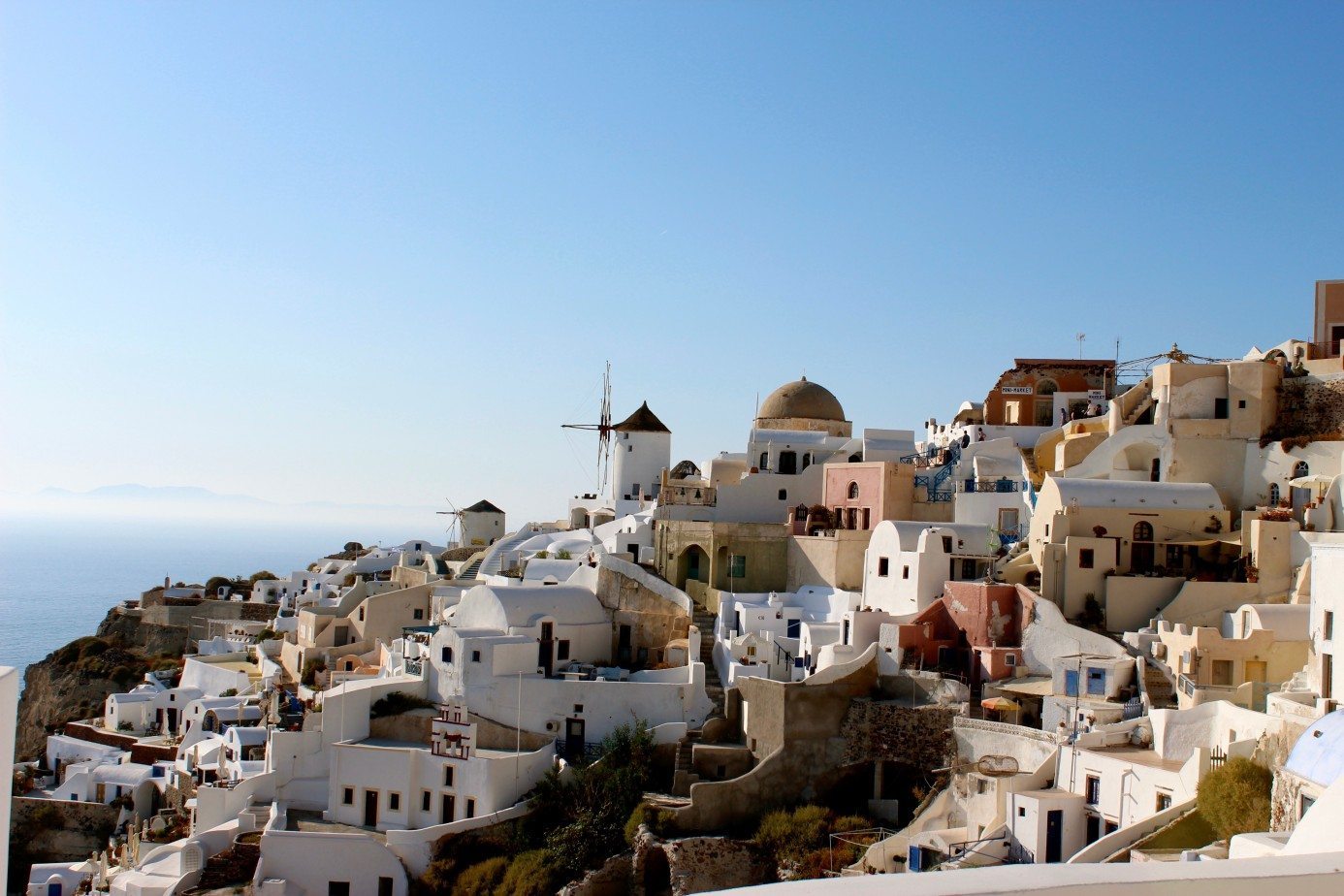 After a very bumpy 1 1/2 hour ferry ride with my friends both seasick we pulled into the Caldera at the port for Santorini, Greece. As I look up in the distance all I see are steep cliffs with white tops that look like snow covered mountains. We got a taxi and headed up the very steep, rail-less, winding road up the cliff. It was a little overcast and drizzling a bit so I was certain we were going to skid right off that road and die. But hey, at least if I died it would have been in Santorini, right? Once we get to the top and on regular roads I breathed a sigh of relief and looked out at the gorgeous landscape. Like much of Greece the terrain is very dry so it’s very rocky and you don’t see much grass or plants growing. Santorini is different though, because everywhere you look there are grapevines. It’s not a normal grapevine, however. Instead of growing like the kind of grapevines we’re use to they grow in baskets close to the ground. The vineyards on Santorini are believed to be the oldest in the world, and there are some vines with the original rootstock hundreds of years old. How crazy is that? Anyways, we arrive at our apartment. We rented an apartment called Blue Dolphins overlooking the amazing Caldera. The view is just absolutely breathtaking. Gorgeous blue seas that seem to go on forever. It’s crazy to think that thousands of years ago it use to be an active volcano that during an eruption the center of the island collapsed thousands of feet into the sea forming the beautiful Caldera and leaving Santorini in a half moon shape. That first night we were so exhausted we walked to a place close to us for dinner and had a delicious meal along with a bottle (or two) of Santorini white wine.

The next morning we got up and rented a car (which I definitely recommend doing) to drive around the island. We heard about the excavated site of Akrotiri so we figured that’s what we’d try to find our first full day. 3 girls in a rental car in another country with just a map=hilarious. We had absolutely no clue where we were. We drove around until we saw something that looked really old so we trekked up thinking it might be Akrotiri. Nope. It was just this really cute old city called Emborio. We walked to the top of the hill and took some pictures and decided to get a coffee at this place called “Kasteli Bar” because we were freeeeezing! The owner was hilarious and insisted that in order for us to warm up we had to take a shot of “Santorini Fire Water”. A little word of advice from my travels, never accept anything that’s homemade in an old plastic water bottle and has “fire water” in it’s name. It was straight up moonshine. Oh, whatever… when in Santorini! I’m pretty sure it burned my tastebuds off! After our coffee and unidentified shot we left, searching for our Akrotiri. As we approached this old, crumbled looking castle a man popped his head out of a window upstairs and invited us in. The place was an old Venetian castle that they restored. Inside the man is one of the only men in the world to make…bagpipes. Yes, bagpipes. Call me blonde but I thought bagpipes were only in Scotland? He showed us bagpipes from hundreds of years ago and played his bagpipe for us. After we just went to a little cafe for some Slouvaki (chicken on a stick), tzatziki, annnndddd a Mythos beer. On our way back home we saw a little roadside stand called “The Good Heart Store”. It was by far the most amazing place I’ve ever seen. She made homemade everything: sundried tomatoes, olive oil, olive tapenade, olives, capers, jellies, you freaking name it. She came out with a little plate and let us try all kinds of goodies. I was completely sold. Pretty sure I bought half her store to take home to my mom. I was like a kid in a candy store. I couldn’t get enough! After that we drove back to the apartment to relax until dinner. That night we walked to this adorable little restaurant called “Vanila”. The entire place was outside under bougainvillea covered trellises. I had a delicious tuna steak for dinner. So good. After we were done our waiter even gave us his homemade strawberry brandy. It was so delicious we begged for a second glass!

The next morning we got up and headed to the marina where we chartered a sailboat called the “Blue Lagoon” for the day. We had such an amazing time. The captain of the sailboat is from the US but decided to move there a few years ago. We took the sailboat all around Santorini seeing all the different gorgeous beaches. We saw the red beach, black beach, white beach, and “hot springs”. I use “quotation marks” around it because it wasn’t hot. Going in May the weather was a little unusually chilly and the water was absolutely freezing. We decided to be brave enough to jump in the freezing Adriatic Sea and swim over to the hot springs. The closer we got… the more I realized the water wasn’t getting much hotter. You know when you were a kid and you decided to be a rebel and pee in the pool? Yea… that’s basically what it felt like. Little spots of lukewarm water. We would all try and find little warm spots and just sit there shivering while our feet were squishing around clay. I swam as fast as I could back to the sailboat. I’m talking Michael Phelps fast. Oh well… at least I could say I did it! When we got back on the boat there were fresh glasses of wine and towels waiting for us. We sailed around some more then they started making lunch. We started off with some fresh made tzatziki, a roasted eggplant dish, a cucumber and feta salad, and some fresh pita. Talk about delicious. Then they grilled some fresh caught squid, made a delicious pasta, and cooked some prawns. Absolutely delicious… and eating all of that on a sailboat in Santorini? Even better. I could die a happy woman at this point. After eating we headed back to change and went to catch the sunset in the middle of town. We enjoyed some delicious homemade wine with tons of Greek appetizers. Feta with every dish, of course.

The next morning we woke up early because it was our last day and we wanted to get as much done as possible. We had a a heaping bowl of fresh Greek yogurt with local honey and fruit. Delicious. We got in our car and headed out. First stop: Akortiri. We finally made it! We did a quick tour which, I guess was cool. To be honest it completely bored me. Maybe I have ADD. It looked like a bunch of old rocks. Literally. After we did that (just to say we did) we headed off to go find the “Red Beach”. It was so gorgeous. We walked around a little bit and took some pictures. After that we were getting hungry and the guy we rented our car from was telling us about an amazing restaurant on the Perissa Beach. The black sand on this beach is gorgeous as well. We went to the restaurant that our new friend told us about right on the beach called “Sea Side”. Apparently the chef is one of the best in all of Greece. He was hilarious. He was this tall Greek guy wearing white linen pants. You could totally see through his white linen pants and see his whitey tighties. Hehe. We started off with some cocktails and had a delicious assortment of food: fried bread with all different kinds of tapenades, sesame crusted feta cheese with a rose jam, these decadent raviolis with chicken, and this delicious sandwich. Everything was unreal. The best thing was the cheesecake he brought out to us at the end. When it first came out it really didn’t look that great to be honest… but boy was I wrong. It had a crisp oreo crust, a creamy chocolate cheesecake, then finished off with probably the best strawberry sauce I’ve ever had. I don’t think we spoke a word a single word while eating it. We were savoring every last bite and soaking in the gorgeous scenery. The restaurant itself was absolutely adorable. It was all outside. If you ever get the chance to go I highly recommend checking it out. After that we decided that we wanted to do a winery tour. We went to “Santos Winery” located at the very top of the hill. The scenery is a dream. They gave us a private tour of the entire place and then we did a wine tasting on the deck overlooking the Caldera. Most of the trip was a little chilly but our last day the heavens really opened up for us giving us the most perfect weather for our last day. We sipped on our Greek wines then we were off to the famous city of “Oia”. When you see pictures of Santorini… for the most part it is of Oia. It’s a very picturesque town with gorgeous scenery. Also, there’s tons of tourists which I’m not a fan of. I’m a local damnit! We had a coffee at this cute little coffee shop and walked around and shopped and took pictures. We also stopped at this adorable bookshop that is owned by a young American man. It is called “Atlantis Books”. It was voted one of the top 20 bookstores in the world. It’s absolutely adorable and the owner invited us to a Tzatziki party that he was hosting later on. We were very excited about that because we love tzatziki. It was getting a little later in the day and we went on a search for a restaurant with a rooftop so we could sit and watch the gorgeous sunset. We found a cute place and ordered some beers and appetizers and watched the gorgeous sun setting over the Caldera. Once the sun set we went to the Tzatziki Festival. About 20 different locals brought tzatziki. We sat there on the roof of the book store, talked with people, drank some wine, and enjoyed the rest of our night. Our Santorini vacation has finally ended. The next morning we got on a plane for Bodrum, Turkey. Santorini was everything one could dream of: white houses overlooking an endless blue sea, delicious restaurants, friendly people, good wine, amazing history, and so much more. I’ll forever dream of this magical place called Santorini.