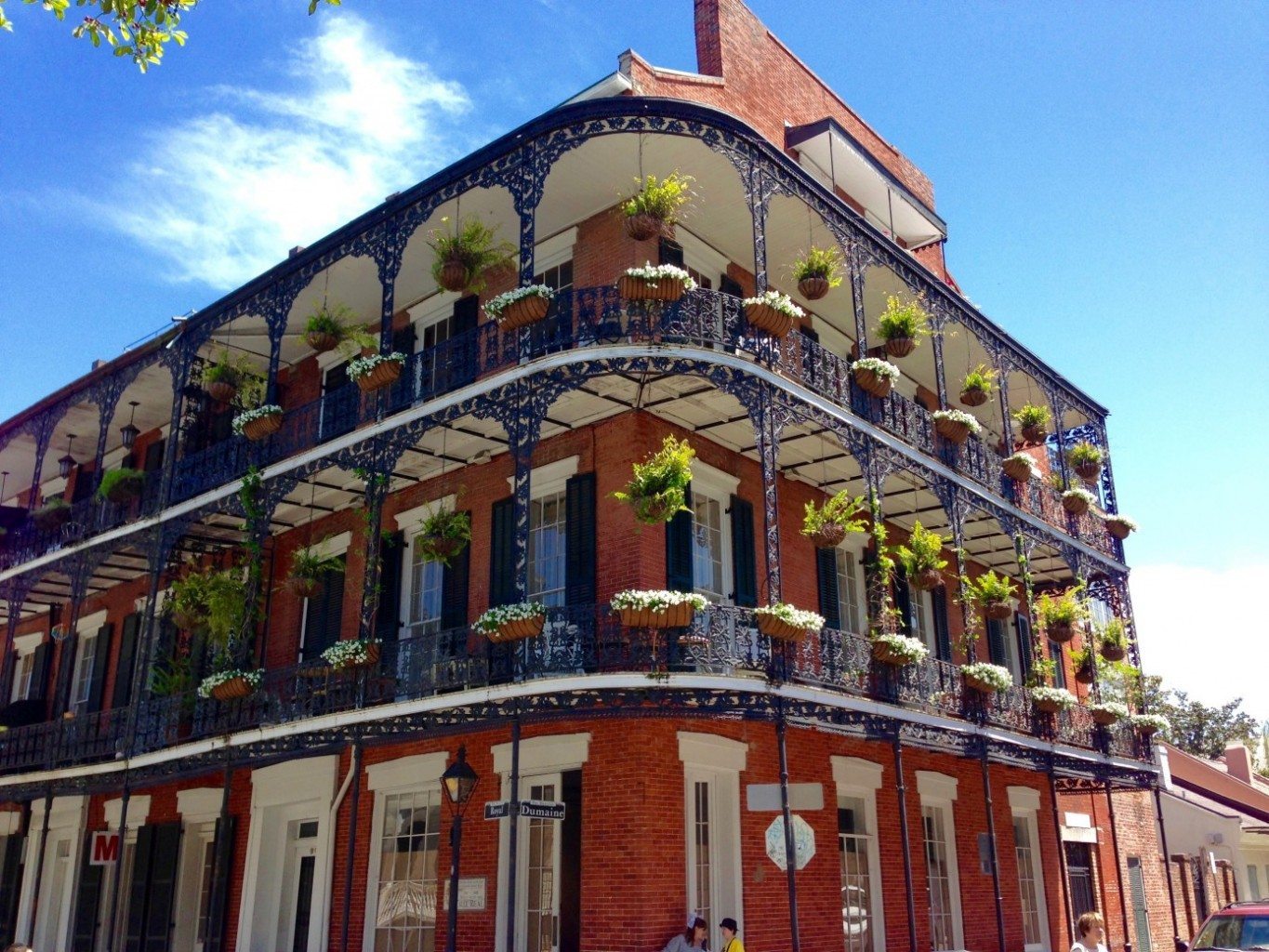 Nawlings. NOLA. New Orleeeeeens. Gosh I love this place. This was my first time ever going and it definitely won’t be my last. I was reunited with some old friends for a bachelorette party (don’t worry… we didn’t wear any penis crowns or fake purple wigs like most bachelorette parties) in this gorgeous city. Now I had no idea what to expect coming into this other than a lot of alcohol, but boy was I mistaken. The music, the food, the architecture, the culture, the people, the cocktails, the mix of old and new, the mix of dirty and elegant, the mix of bums and rich Southern folks all make up this city. It’s like nothing I’ve ever seen before. I first arrived in New Orleans early afternoon and met up with 2 girls from the bachelorette party that got in around the same time as me. We all instantly hit it off and decided to go unload our things at the hotel (we stayed at the Marriott on Canal St) and walk around. We walked down to Bourbon street and decided we needed to get some food annnndddd a drink. We found this great restaurant called “Deanie’s Seafood” on Iberville St not far off of Bourbon. We sat down, ordered an Abita beer and asked what the best thing to order was. They recommended we get the Seafood Gumbo and the Broiled Oysters. Done. A few minutes later we get our food and dove in. The Gumbo was absolutely delicious and full of fresh seafood. One of the girls even had an entire crab claw in her soup. The oysters had Parmesan and butter on them and were broiled to perfection. Honestly… what isn’t good with butter and cheese on it? Answer: nothing. After we were done we decided to go get a famous hurricane. Oh my. Those things are deadly. Very deceiving drinks. They don’t taste like anything is in them but trust me it’ll hit ya in about 20 minutes. We walked around and listened to some awesome Jazz street performers then headed back to the hotel to meet up with all the girls that just got in. I only knew about 3 of the 12 so the first 20 minutes were spent meeting everyone. We all hit it off instantly. We checked in and we were off for the day! The first thing we did was go to a daiquiri place close to Tulane University where my friend Kelley went to college. We got another cup of frozen alcohol and went to a restaurant next to it called “Cooter Brown’s Tavern” for some midday snacks because we were all starving. Cooter Brown’s Tavern is located in the Riverbend section of uptown New Orleans. My new friend Kelsey and I shared a “half” of a muffaletta. That thing was ginormous but delicious. Layers of ham, salami, provolone, and topped with an olive salad. It’s a New Orleans specialty that you have to try when you’re there! We then hopped on the cable car on the scenic St. Charles Ave and stopped at the Columns hotel for another drink and hopped back on the cable car and headed towards Canal street. We went to an early dinner at SoBou (South of Bourbon) on Chartres St. We all got a bunch of appetizers to share: blue crab mousse in a jar, these yellow fin tuna cones that was a pineapple and coconut tuna tar tar topped with basil and avocado ice cream (OMG), butternut squash beignets with a foie gras fondue, duck debris & chicory coffee ganache (are you kidding me!), and then a couple of salads because we’re ladies and ladies eat salads. After dinner I was basically dying from consuming so much rich food and alcohol and getting up so early that morning that I decided to call it a early night. I’m a grandma, I know. The girls went out for a little but most of them called it an early night as well. Tomorrow was French Quarter Fest!

We woke up the next morning and just ordered some room service for breakfast. Gosh, I just love room service for breakfast. It makes me so happy. Anyways, we all got ready and went down to the French Quarter for the big fest. There were tons of people and vendors lining the streets with all kinds of delicious food and drinks! We walked around and immediately went to Cafe Du Monde. I mean, come on, if you’re in New Orleans it’s basically a sin to NOT go here and get beignets. Everyone just decided to have 1… I had 3. Whatever don’t judge me I’m on vacation! After consuming too many delicious friend doughnuts and making a complete mess with all the powdered sugar we walked down to the river to go listen to some music and get some beer. In the springtime Abita, a New Orleans beer, puts out a special beer called “Strawberry Abita”. If you ever get the chance to buy this do it. You’ll thank me later! It’s basically spring in your mouth. We found a great little spot with a cute patio and got a few pounds of crawfish and Strawberry Abita. Pretty sure we polished off 4 pounds in a matter of minutes. They were delicious. After we were done with our little appetizer of 4 pounds of crawfish we were hungry and ready to brave the crowd and go into the fest for the food. All the famous restaurants in New Orleans have tents set up so it’s really an amazing thing to be able to taste a little of everything from all of the famous restaurants. We all split up into eating teams and dove right in. From Jacques-imo’s Cafe we got a slow roasted duck po-boy, shrimp & alligator sausage cheesecake, and a crabmeat & artichoke heart salad. Oh. My. God. So good. Next time I’m in NOLA I’m definitely going here. I know what you’re thinking…shrimp & alligator sausage cheesecake?!Yes. It is true. I tried it and it was delicious. I would describe it more as a quiche consistency than a cheesecake. There wasn’t a crust and I’ve never have a cheesecake without a crust. Next stop: Dickie Brennan’s Steakhouse for a prime beef debris po-boy and a bourbon bbq shrimp po-boy. That prime beef debris po-boy was probably the best thing I put in my mouth all day. It was unbelievable. Next up: K-Paul’s Louisiana Kitchen for New Orleans chicken grillades with cheddar cheese grits. Hands down best grits of my life. Ya’ll don’t even understand. I want to bathe in those cheddar cheese grits. UGH! Then we decided we wanted a little something sweet so we went to the Plum Street Snowballs tent. I got a coconut snowball (same thing as a snow cone) with… evaporated milk on top. It was like a pina colada. Delicious. After our snowballs we were tapped out. At this point I was wondering if it would be ok to walk around with my pants unbuttoned. I saw a bunch of bums rocking that look so why couldn’t I?! We decided to walk back to the hotel to relax for a little. We knew we were going to have a long night ahead of us on Bourbon St. On the way back to the hotel I got a wiff of something that made me want to cry it smelled so good: Pralines. I dipped into the store called “Southern Candymakers” on Decatur St. Sweet baby Jesus I thought I died and gone to heaven. The store was packed with all kinds of delectable treats. I opted for their famous original creamy pralines. They’ve won awards from bon appetit, gourmet, and many more. I decided I’d buy a pound to bring home for my mom and dad. Bad idea- I ended up eating half of them when I was home for the next week. So much for a beach body this Summer.

Back at the hotel our phones were all being blown up by the other girls that were still out having fun. We decided to change and put on our game face and go out for the night. We met up with them at the Carousel Bar in the Hotel Monteleone off of Royal Street. The bar literally is a carousel that slowly turns. Really trips you out at first. We decided to try a famous New Orleans Sazerac which is made up of whiskey, bitters, simple syrup, absinthe, and a lemon twist. Whew! That’ll put some hair on your chest. Is it bad that I liked it? Is that saying something about me? Hmm. After our drinks we decided it was time to go to (cue the dramatic music) Bourbon Street. We first stopped off at a bar called Bourbon Cowboy. It looked like a classy joint. We met a group of guys from a bachelor party and challenged the bachelor to a chugging contest against our bachelorette (they girl can put it away like no other) and they accepted and she dominated. Had no doubt. That’s why we’re friends. Poor guy. I don’t think he’ll ever live it down from his friends! We got a beer and decided to go watch all the crazies on the mechanical bull. That was one of the most amazing things I’ve ever seen. My cheeks still hurt from laughing. This hot mess of a 50 year old lady in a dress got up there. Let me reiterate that… she was in a dress. Oh, and a black thong. Saw that too! We ended up having so much fun there and went to some little restaurant with the guys to get some food. We got fried gator, oysters, red beans and rice, you name it. After our midnight snack we went back out to a bar called The Beach On Bourbon. It started absolutely pouring down rain so we were all dancing in water but I guess it was fitting because we were at “the beach”. After awhile we decided it was time to call it a night so we ran back home through the rain… and all the beads being thrown at us.

The next morning we got up and most of the girls had early afternoon flights so they couldn’t do much. I was the smart one that got a 6 pm flight so I could enjoy the day. Three other girls were as smart as me so we decided to walk around and enjoy the rest of New Orleans. We went back to the French Quarter because the festival was still going on. We met a gypsy that read my palm and knew way too much about me and convinced me that I’m moving to England when I’m 40. Ok gypsy man whatever you say! Two of the other girls had to go catch their flights so Kelsey and I were the last ones standing. We decided to go get a nutella crepe and then go to cafe du monde for some beignets and coffee. We then walked back to the hotel and were off to the airport and I was on my way back home. I didn’t want to go! What a wonderful weekend full of new friends, food, and fun. New Orleans is such an amazing place with so much to offer. You can get a little of everything you want there. I will definitely be back there soon. As they say in New Orleans “Laissez le bon temps rouler”. Let the good time roll, friends.