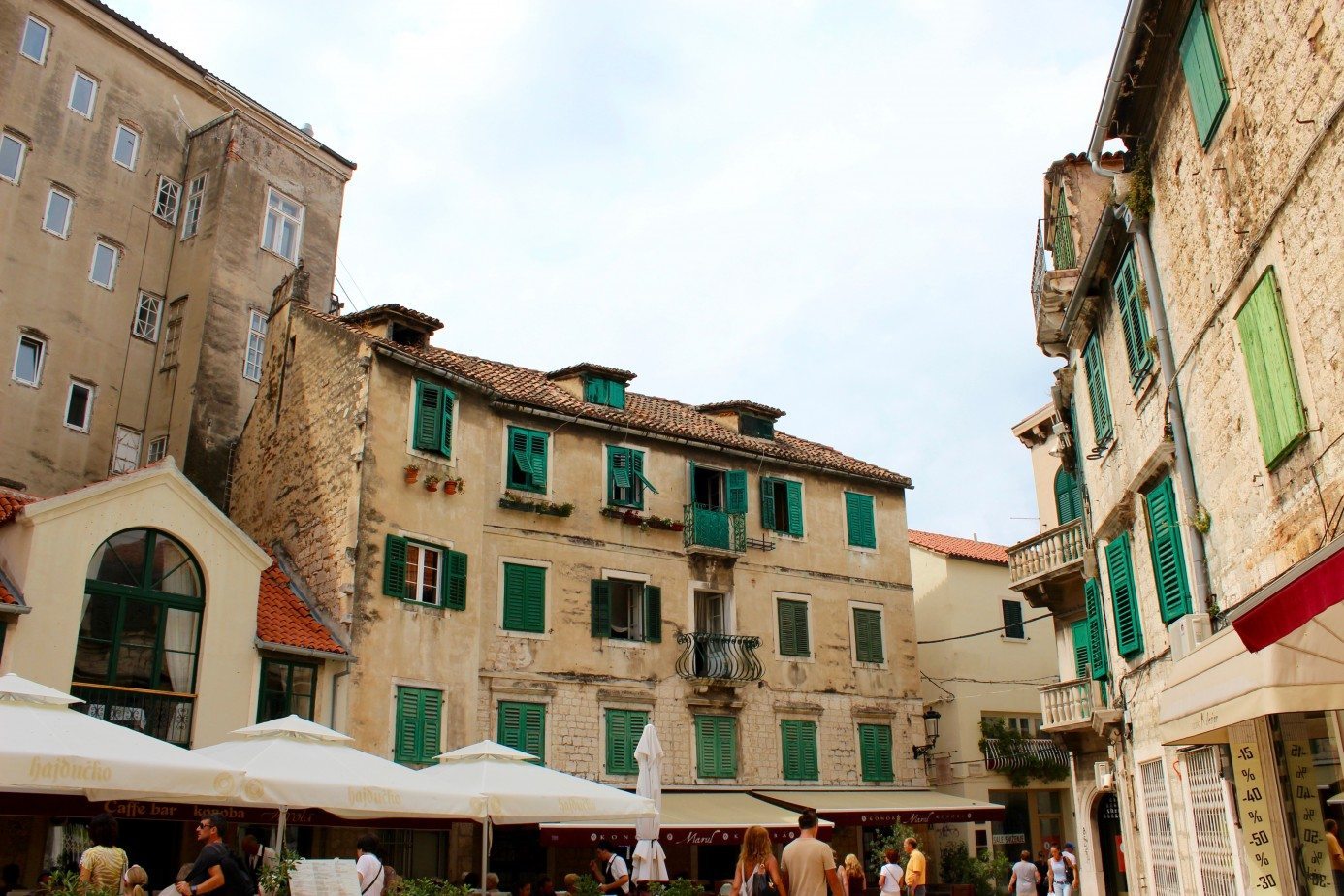 When my cousin and I were planning our Croatia part of the trip we decided that we had to stay at least one night in Dubrovnik due to all the hype about how amazing it was. When we were looking online for apartments in Dubrovnik we realized how ridiculously expensive it was to stay there so we found a town right outside of Dubrovnik called Cavtat (pronouned cev-tat). Our apartment we rented was so adorable and the people we were renting from were so sweet. They gave us tips about where we should go for the 2 days we were there. Our first day we went down to the water and decided to go for a swim in the gorgeous (but freezing) water for awhile. Around that area there aren’t any sand beaches, but big rocks that you jump off of and into the ocean which always makes for a hilarious adventure getting in and out. It was a picture perfect day out and all we wanted to do was soak in the beauty of Croatia. After swimming for awhile we put back on our clothes and had a lunch of grilled fish at this awesome outdoor restaurant right next to where we were swimming. We enjoyed a glass of wine with our fish and decided that life was great. We walked around the harbor after our late lunch for awhile before heading to this adorable no-named sunset bar that the people we were renting from told us about. This bar might be one of my favorite places of all time to be honest. It sat on the edge of the cliff looking at the Adriatic and was almost like a tree house. Instead of normal barstools they had tree stumps that you sat on. We sat there for a while, having a few Karlovacko beers, talking with the owner, watching people dive off the rocks into the dreamy sea, and watching the sun go down. It was perfection. We decided after having such a large late lunch that we weren’t that hungry for food so we opted for gelato and wine. Hey, a girl’s got priorities here.

The next morning we woke up to another gorgeous Croatian morning and headed down to the main harbor to get a coffee and catch the first ferry to Dubrovnik. If you are going to Dubrovnik I highly recommend staying in Cavtat and just taking the ferry to Dubrovnik whenever you want. It’s a cheap and scenic 25 minute boat ride. Once we got to Dubrovnik we went inside the walls and walked around. It is absolutely gorgeous but flooded with tourists. I mean, tons of annoying tourists. We walked around looking at all the gorgeous architecture and stopped to get some pizza for lunch. I loved Dubrovnik, but I wouldn’t want to do anything more than just a day trip there to be honest and I’m glad we did it the way we did. After a few hours we hopped on the ferry and headed back to Cavtat to get our car, pick some fresh figs and grapes from our apartments garden, and we were off to Montenegro for 8 days.

Driving back from Montenegro was gorgeous and very easy. If you get the chance you should rent a car for sure. We drove from Kotor, Montenegro to Split, Croatia and it was about a 6 hour scenic drive with spectacular ocean views the entire way. After a while of driving on the coast the road veers off into the gorgeous mountain valleys where all the farms are. It was really beautiful to drive through. There were tons of little stands set up on the side of the roads with people selling produce and goods. Once we arrived in Split we headed to the port where the person we were renting our apartment from was picking us up and where we were dropping off our beloved P.O.S rental car. We dropped off our car and walked to a designated place where we were told a man in a black jeep was going to pick us up. We waited and waited and saw tons of cars drive by but no jeep. As we were standing there waiting for our ride we see this mini van with huge, hulk-like men flexing and holding protein powder decals all over the car. I mean, it was hilarious. Inside was this short but super bulk man inside on the phone while techno music was playing. I looked over to my cousin and go, “I would absolutely die laughing if that was our ride”. We giggled about it for a little while and continued to wait. We texted the owner and told them that we were two blondes (probably should have mentioned that in the first place) waiting by the ticket counter. Right after we hit send we see the hulk-man look at his phone and then look at us and wave. I tried my hardest not to laugh and we got in the techno-filled hulkified mini van. The owner didn’t speak any English which probably worked in our advantage. We laughed the entire way to our apartment. I mean, tears streaming down my face while tinkling my pants a little. I have a problem, I know. Once we get to our apartment we thank him and run as fast as we can inside so we can laugh some more. Our apartment there was ok… but we were only staying there 2 nights so we didn’t really care what it looked like. Plus, the top balcony had a gorgeous view. I’m going to be completely honest here… Split is a dump. Yes, there is old architecture there and blah blah blah… but what European city doesn’t have gorgeous architecture?! I would say about 90% of the people are only staying there for a night or two before heading to other Croatian islands through the Split port. After we settled in we whipped out a bottle of wine we bought in Montenegro and decided that was the only way we were going to get through the next 2 days there. That night we went down into the main square which is actually really pretty. We walked around the maze like fortress until we found a cute little outdoor restaurant and sat down. We got a salad and a grilled meat platter which was absolutely huge and filled with unidentifiable meats. Oh well, I ate them anyways. After that we walked around and found a little outdoor bar and sat down to have a nightcap.

The next morning we got up and ate breakfast down in the square by the water which was nice until a man let out a huge walking fart right next to us. I mean, the man crop-dusted me while I was eating! Anyways, we walked around Split for most of the day, stopping for cocktails and food periodically. The architecture is very pretty so if you go to Split just walk around the ruins of the Diocletian’s palace which was built between the 3rd and 4th centuries A.D. It’s a UNESCO World Heritage Site so definitely see that. After that we walked to the outskirts of Split to this really cute little restaurant overlooking the water and the center of Split. After a few Rum and cokes (why does Coke taste SO much better overseas?!) we decided it was time to go home and get ready for dinner. That night we went to a restaurant and had a delicious dinner of tomato soup to start and squid ink risotto that we split because the portions were huge! We decided to get the soup because it was chilly at night in Croatia. Ok, by chilly I mean 70’s but that is chilly to me. After that we walked around and found the cutest bar and had some drinks at. We met a group of traveling French guys our age and we joined tables and Jesse and I spent most of the night doing our best French accents and dancing with the guys. We had so much fun that we looked at our watches and realized it was 5 in the morning! We stumbled back to our apartment and called it a night. Tomorrow we were off to the gorgeous island of Hvar and we needed to wake up in a few hours to catch the ferry at the port.